Russia’s massive assault on Ukraine changed the world forever—and threw the lives of Ukrainian civilians into danger and tumult, including many scientists across disciplines both in Ukraine and around the world.

Just last weekend, Russian drone strikes left the port city of Odessa in the dark. Meanwhile, Ukrainian troops launched attacks on occupied regions of Ukraine, including Melitopol and Donetsk as Russian forces continue to build up defensive positions. The Ukrainian counterattack has come a long way since the early Russian siege of Kyiv, and fierce fighting in the east continues. Crews across Ukraine are scrambling to patch up the nation’s damaged power grid faster than Russia can take the infrastructure out, a battle of utmost importance as the winter cold settles in.

How could anyone focus on work when such a conflict is ripping through the country, endangering all lives? But somehow, since the conflict erupted, Ukrainian researchers and scientists have done what they can to defend their homeland and continue their research, even under dire circumstances. Here’s a look at the resilience, the fight for survival, and the international cooperation that have risen out of the ashes of a fierce war in Ukraine.

Resilience: Researching after your lab gets bombed

The Kharkiv Polytechnic Institute in Kharkiv had its labs reduced to rubble. A missile struck the lab three-story building, blowing out the windows, scattering concrete chunks everywhere, and burying the interior in debris. Fortunately, the bombing took place at night so the building was empty, and there were no casualties.

The team was able to salvage a great deal of their equipment and research. From there, a burgeoning collaboration between KhPI and Tulane University stepped in to allow the researchers to continue their work.

The two universities recently agreed to a five-year partnership based on the efforts of Denys Bondar, a Ukraine native and physics professor at Tulane. The two departments had a significant research overlap and had promising collaborative research opportunities in solar energy and signal processing. The Tulane team dipped into their personal funds to provide high-efficiency solar cells and ensure that the collaboration continued as planned.

Since then, the two universities have applied for a joint grant from the U.S. Embassy in Ukraine in the field of alternative energy, which Kseniia Minakova, PhD, an associate professor of physics at KhPI, says will enable students to learn from some of the world’s leading experts in renewable energy. 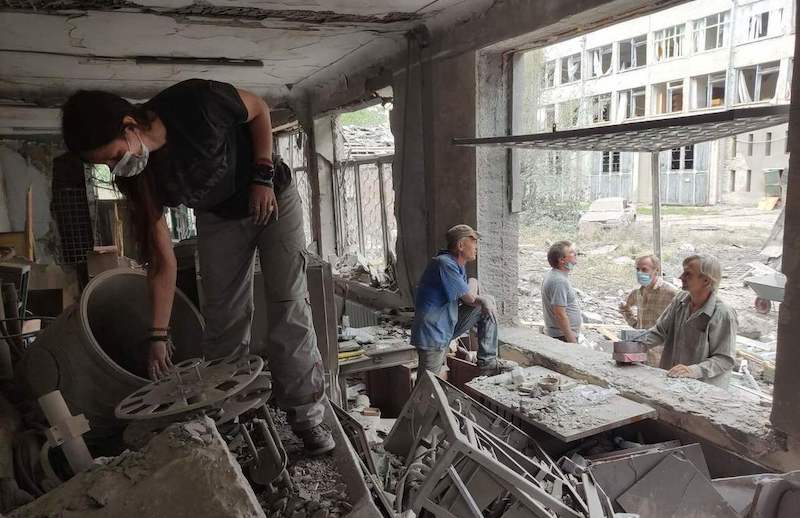 The Kharkiv Polytechnic Institute wasn’t the only victim of Russia’s attacks. On October 10th, the office of the National Antarctic Scientific Center (NASC) located in Kyiv was partly destroyed by a Russian missile that hit a nearby motorway. A critical server holding the longest-running ozone and climate records in the Antarctic survived the impact—dodging the missile by less than fifty feet.

The damage was considerable, with collapsed ceilings, damaged walls, shattered glass, and debris everywhere. But fortunately, there were no casualties, and all of the priceless data and fruits of Ukraine’s Antarctic expeditions was preserved. The NASC researchers continue their work remote and online, working to support the current Antarctic expeditions and preparing for new ones.

Survival & heroism: Researchers on the run, in the army

Plasma physicist Olena Prysiazhna made the difficult decision to evacuate Ukraine in early March, leaving behind her village where her family had spent most of their lives.

Her family didn’t have a car, and needed to spend a week wandering Ukraine before they found a driver who was able to get them to the Polish border. From there, her family made it to a refugee center and ended up in the Netherlands on March 16. They were traumatized and exhausted, but finally safe from the missiles and advancing Russian army. With her life uprooted, Prysiazhna had to figure out how to continue her research as she continued to teach online classes to her students in Ukraine.

Pavlo Bazilinskyy, an assistant professor at the Eindhoven University of Technology, likewise just managed to escape from Ukraine in time. He moved his mother at first to Kyiv and then out of the country, crossing into Poland just hours before the government made it illegal for men of fighting age to leave the country.

Other scientists have enlisted in the Ukrainian army to do what they can to serve their country. Valerii Pokrytiuk, a young data engineer accepted to a master’s in bioinformatics at Oakland University, is serving on the front lines as a medic.

It’s difficult to imagine the contrast from his previous life as a data engineer at a genetic-sequencing firm. After volunteering on the first day of Russia’s invasion, Pokrytiuk was called up, then placed in a border-guard unit of the army a few weeks later. He underwent basic training around tactics, shooting, and combat medicine, before leaving for the front on the “first line of defense.” 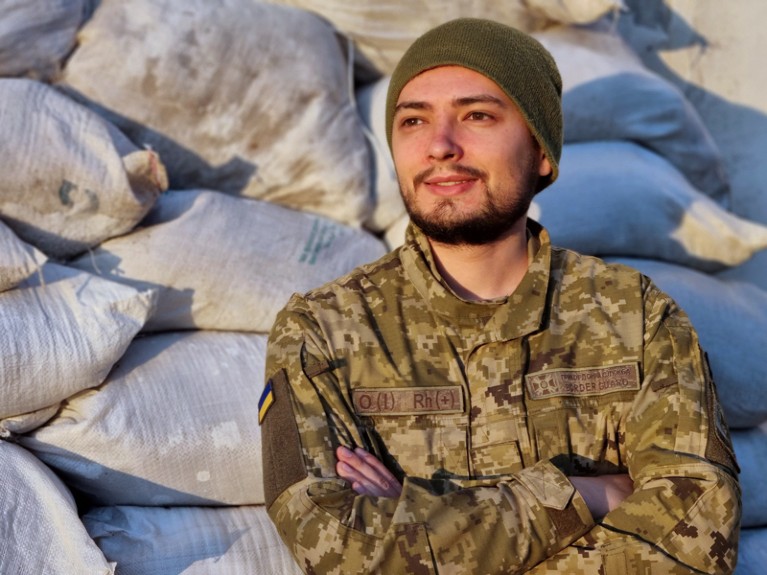 “There are times to create science and there are other times to protect science and our ability to work as scientists,” Pokrytiuk told Nature. “Today is the other kind of time.” While Pokrytiuk couldn’t disclose the details of his dispatch, he shared that his immediate family was safe.

He’s demonstrated tremendous courage in the face of war. “I’m not scared,” he said. “We know what we’re fighting for.”

In the face of the Russian invasion, some research that was already significant suddenly became a matter of utmost importance. One clear example was joint research between the Natural History Museum in London and Ukraine’s National Academy of Sciences to establish the cause of damage to the renowned medieval murals in Saint Sophia Cathedral, a UNESCO World Heritage Site in Kyiv.

The murals, which were painted around 1000CE and are some of Ukraine’s most significant artworks, had started to develop dark spots and flake away. Ukrainian scientists discovered cracks and voids within the fabrics and large, unusual crystals. They researched what type of microscopic organisms were living on the walls in hopes of finding the cause of the damage.

Then, war struck—and the Ukrainian scientists who were taking the lead on the project had no choice but to put their life on hold for their own safety. Lead author Marina Fomina had to flee Kyiv when an attack on the capital appeared imminent. But that’s where scientists from the Natural History Museum stepped in, helping to complete the research and publish the joint paper ascertaining the culprit: fungi.

“It is a huge relief to understand the cause of this damage and enable its conservation for our national and the world’s cultural heritage,” Fomina told the Standard. “Russia’s attempts to violently destroy and assimilate so much of our cultural identity meant the work to preserve Saint Sophia and this precious artwork was even more urgent.” 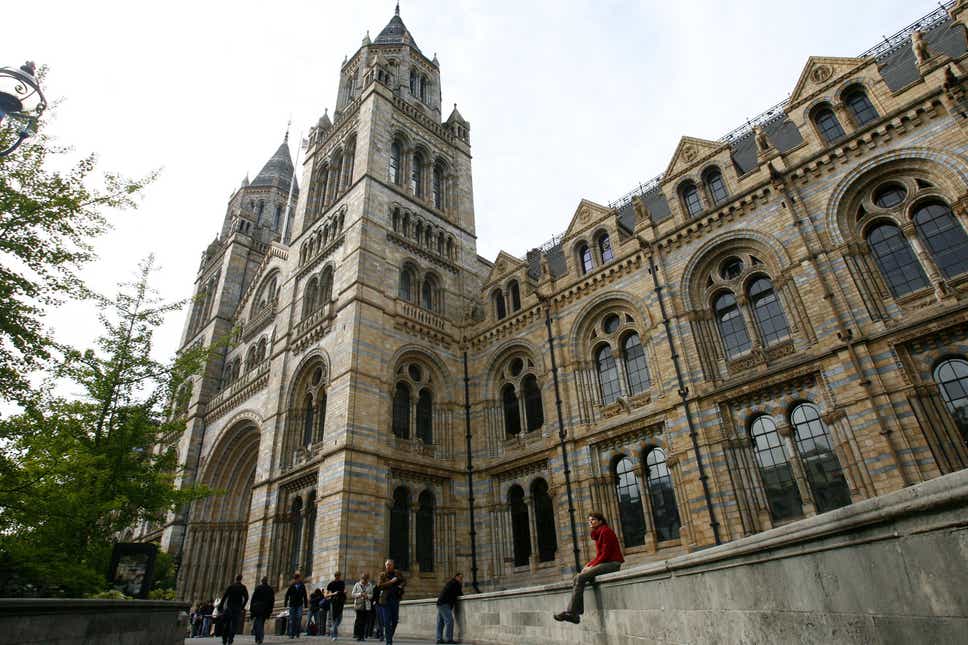 Joint research initiatives like the ones between KhPI and Tulane, and the Natural History Museum and the National Academy of Sciences, have become all the more important to help sustain and support Ukrainian scientists. Since the war began, the organization #ScienceForUkraine emerged as a grassroots initiative of students and scholars. The group’s goals are to disseminate information about support opportunities for Ukrainian researchers, monitor the current situation of Ukrainian research, raise awareness of the need for support, and build partnerships for the Ukrainian scientific community.

It didn’t take long before Ukrainians were able to take advantage of this solidarity. Christina Farmand, a chemistry student from the National University of Kyiv, was able to find an internship at the University of Greenwich in London in March through #ScienceForUkraine just weeks after the war began. As of early November, the group has an extensive list of hundreds of support opportunities in dozens of countries around the world.

Research on the war

Since the war began, it’s been more than only Ukrainian scientists playing a role. Some researchers have been quick to examine and produce groundbreaking research on the Russia-Ukraine war to save as many lives as possible. In recent research, new findings from the Medical University of Warsaw detail the provision of HIV care to war refugees migrating to Poland from Ukraine. Researchers from the University of Putra Malaysia explored the state of pediatric health in the Ukrainian crisis, where children are more vulnerable to injuries, infection, malnutrition, and trauma.

In terms of geopolitics, a study from Queen’s University Belfast studied the increase of armaments in European countries since the Russian invasion, observing that a new race to arms could be underway. And in economics, researchers from the Hungarian University of Agriculture and Life Sciences analyzed the way the war has disrupted food production and trade, assessing the dangers to food security.

Whether scientists stayed in Ukraine to conduct research while under siege, joined the military to fight for their country, escaped for the sake of their family’s safety, or embarked on new collaborative research projects, the efforts of Ukrainian scientists shouldn’t go unnoticed or ignored. As the war rages on, the international scientific community should continue to do everything in its power to aid Ukrainian researchers, students, and citizens in need.

←Back to resources As the sheer amount of online content and available research continues to... 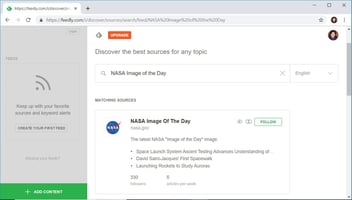 how to research, scientific research sources

←Back to resources Your definitive run-down of what RSS feeds are—and how to use them. 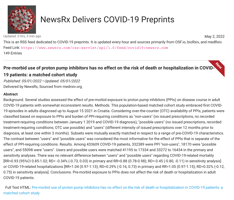 ←Back to resources In a rapidly shifting scientific landscape, it’s harder than ever for...